After weeks of incredibly subdued volatility, the bond market (which dictates rates) is starting to show some signs of life, but not for the same old reasons.

Inflation is one of the oldest and most significant reasons to freak out about interest rates.  It was by far and away the dominant source of drama in the 70’s and 80’s, arguably doing more than anything to shape the way policymakers would think about their rate-related goals going forward.

For instance, 3 decades of runaway inflation caused Fed policy to gradually evolve into a deadly weapon against higher rates.  The other school of thought is that inflation was destined to fall for reasons beyond the Fed’s monetary policy decisions.

Either way, fall it did!  By the late 90’s core inflation was under 2.0% for the first time in 30 years.  This was all so new/sudden, and the past 3 decades so traumatic, that the Fed was in no hurry to do anything to push inflation HIGHER for any reason.  Still, they were willing to accept a moderate increase in inflation in order to combat the 2001 recession.

After Fed Chair Greenspan’s significant rate cuts in the early 2000’s, inflation managed to crest 2.0%, but it didn’t spend much time there due to the onset of the financial crisis (recessions push rates and inflation lower, in general).

The financial crisis caused a massive rewriting of the Fed’s inflation-fighting playbook.  For the first time in modern economic memory, they were on the OFFENSIVE–attempting to prevent inflation from falling too much (something that lessons from history suggests is just as insidious as high inflation).  Despite unprecedented efforts such as years of record low Fed Funds Rates and trillions of dollars of bond purchases, sustained inflation over 2.0% proved elusive.

The onset of the pandemic put instant DOWNWARD pressure on inflation (except for toilet paper?), and that’s one of the reasons the Fed came out with guns blazing in March (promising low rates for years and as much bond buying as it takes).  The new buzz word for inflation is “symmetric.”  It references the Fed’s belief that inflation needs to run over 2.0% for a while to make up for time spent under 2.0%.  The following charts illustrate that concept.  The first one might be confusing, but the 2nd one is drastically simplified a la Goldilocks. 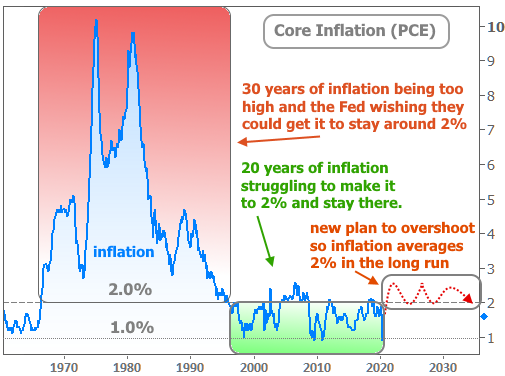 And the Goldilocks version: 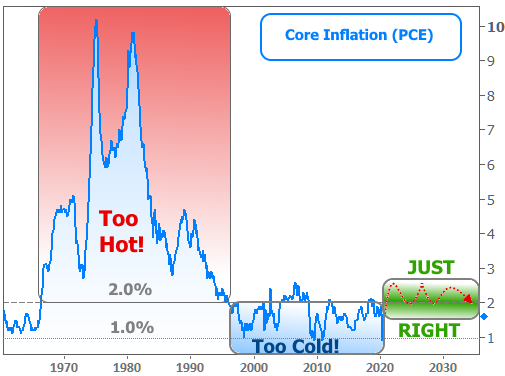 The Fed’s new policy stance is so aggressive that some market watchers wonder if it’s time to worry about inflation again after taking the last 2 decades off.  For now though, that’s filed away in the drawer marked “bridges to be crossed when we come to them.”  Case in point, Core Inflation moved up to 1.6% this month from 1.4% last month and markets didn’t blink.

If anything is more of a “same old reason” for rates to move than inflation, it’s the jobs market, and this week brought the biggest jobs report of the month.  Although the economy continues to recover jobs after the pandemic’s record-setting eradication of the workforce, the pace of the recovery is starting to slow.  After adding almost 1.5 million jobs back last month, this month’s report added fewer than 900k jobs.  With only about half of covid’s labor market damage undone, some economists worry that it’s too early to be seeing things level off like this.  Even if those fears prove to be unfounded, the data certainly wasn’t strong enough for interest rates to react. 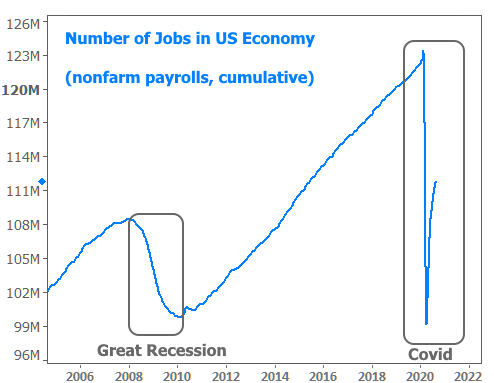 The president has covid.  If we’re talking about the normal reasons that interest rates might see volatility, this type of news would be filed under “headline risk” as well as “political uncertainty.”  You’d be well within your right to assume it could have an impact on the bond market and consequently on rates, but alas, it was mostly a factor for stocks.

The bond market is instead thinking LONG term, and thus not incredibly interested in making big moves until the pandemic changes in a big way.  If you forced bonds to name their biggest sources of motivation, Trump’s covid diagnosis doesn’t make the list unless things get much worse.  Even then, markets are already braced for change and uncertainty at the executive level due to the election.

Finally we come to the only item on the list that does NOT play a recurring role in the history of mortgage rate motivation.  After all, large scale stimulus programs are not common in the first place–and downright unheard of when it comes to the scope of post-covid fiscal stimulus.

Simply put, no matter what you think of fiscal stimulus from a political standpoint, if the government is throwing trillions of dollars at the American people, markets are going to respond.  The quintessential response is for stocks to improve and rates to rise, and that’s generally what we’ve seen surrounding various key updates on stimulus negotiations.  These updates were definitely the biggest market movers this week for bonds/rates.  The following chart shows how Friday’s stimulus headlines compared to the overnight news of Trump’s covid diagnosis. 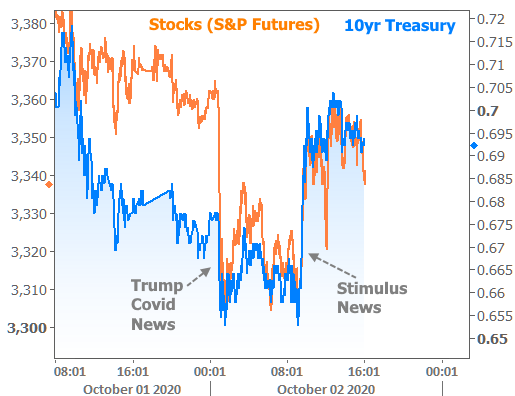 While it’s true that the chart above suggests the Trump news was a big deal for stocks, context is also important.  Here’s the context : 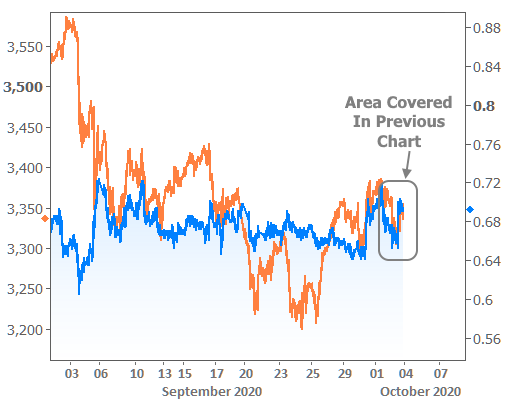 As we look at the chart above, we see stocks have experienced much bigger pockets of inspiration recently.  We’re also left with the sense that the bond market (the blue line) is more flat than anything.  And although the blue line isn’t perfectly flat, we also need to remember that mortgage rates are a few degrees removed from the 10yr Treasury yields.

Mortgage rates are based primarily on mortgage-backed-securities (MBS), which tend to move almost exactly like 10yr Treasury yields in the big picture.  But in the smaller picture, we can see the two diverge quite a bit.  Not only that, but mortgage lenders have a few other considerations in addition to MBS prices that can drive an even bigger wedge between the movement seen in mortgage rates compared to the 10yr Treasury yield.

Covid created the biggest wedge ever.  Not only did it hit MBS versus Treasuries, it also hit mortgage rates versus MBS–a true double whammy.  Fortunately, this all occurred when rates were plummeting far below previous record lows.  Simply put, who cares that mortgage rates are underperforming 10yr yields if you just saved hundreds a month on a refi?

The wedge has been slow to shrink and the recently announced fee for virtually all conventional refinances only prevented the shrinkage. 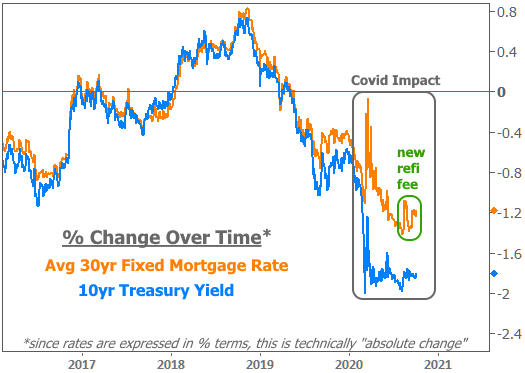 The silver lining to this “wedge” business is that mortgages have room to improve.  That will take time though. After all, a huge reason for the blowout is the fact that lenders are just too busy to drop rates any faster. 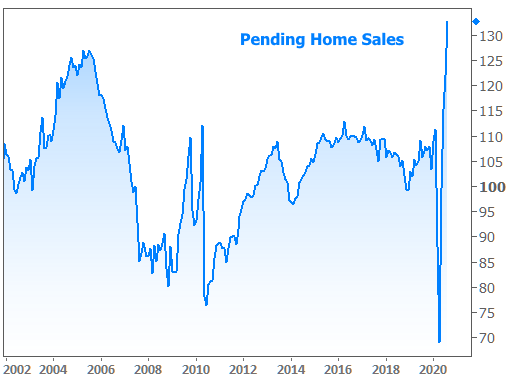 The pandemic has proven to be a powerful source of motivation for the housing market. After grinding to a halt in March and April like the rest of the economy, home sales and prices have bounced back with a vengeance. Several monthly housing-related reports were...