The bond market, which drives interest rates, is in the habit of reacting to big developments that impact the economy and inflation. At present, bonds are forced to wait for several such developments, but only one of them might come into focus this month.

The developments in question are all very different, but all are important in their own way.  They are:

Naturally, the pandemic’s economic impact will take years to be fully understood.  On that front, there will be no single event that decides the fate of the market and interest rates.

The election, on the other hand, has a definitive result and deadline attached to it, but it’s still a month away.

In the meantime, fiscal stimulus is an important consideration for the economy, the election, and especially for interest rates.  A decision could come at any time.  It could be delayed until after the election.  It could be bigger or smaller than expected. But odds are something will happen before the election and despite all the political posturing, that it will fall somewhere between the two ideological boundaries guarded by either side of the aisle.

This is a big deal.  To understand why, consider the following chart of ISM’s Non-Manufacturing Index–one of the broadest barometers of economic activity in the US and far more timely than GDP. 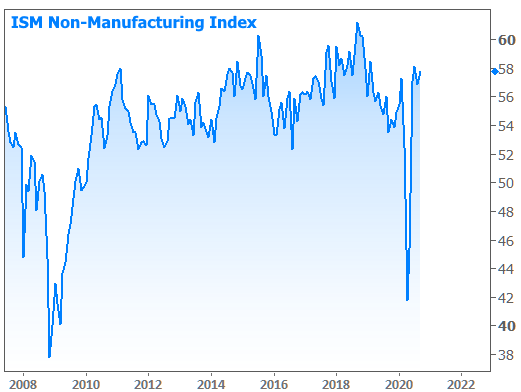 While these numbers certainly would have bounced back from their recent lows either way, there’s widespread bipartisan agreement that the relatively fast passage of a large, initial stimulus bill made the bounce much bigger and faster than it otherwise would have been.  There’s similar agreement that additional stimulus is nothing short of mandatory in order to avoid more dire economic outcomes.

These outcomes matter greatly to both stocks and bonds (aka rates).  That was apparent this week as both stocks and rates made their biggest moves lower after Trump tweeted that stimulus was on hold until after the election.  Subsequent stimulus headlines continued driving smaller pockets of volatility throughout the week. 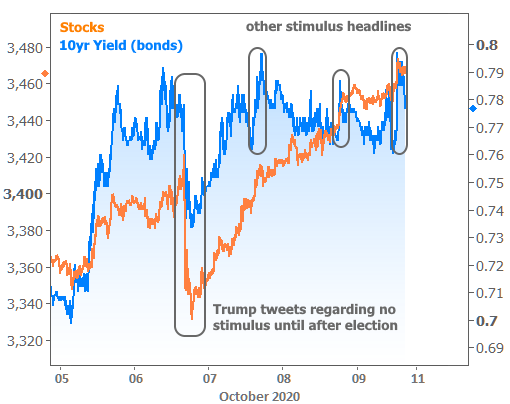 If it looks like the two lines above aren’t responding in quite the same way, that’s because they’re not!  Bonds experienced most of their volatility right at the beginning of the week despite continuing to react to stimulus headlines more readily than stocks throughout the week. 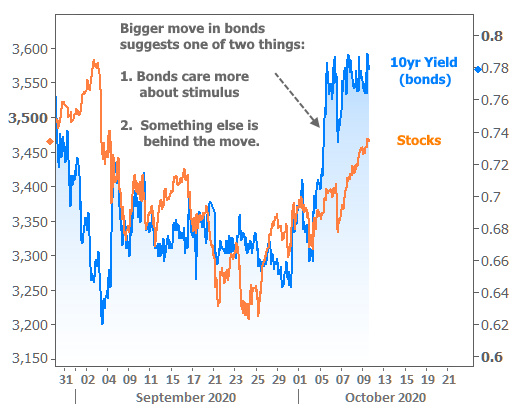 There are quite a few ways to argue both for and against the correlation between rates and stocks.  The longer the time frame considered, the more the correlation breaks down.  Nonetheless, we can see that the stock market correction in September coincided with a flattening-out of interest rates just as they seemed to be bouncing higher. 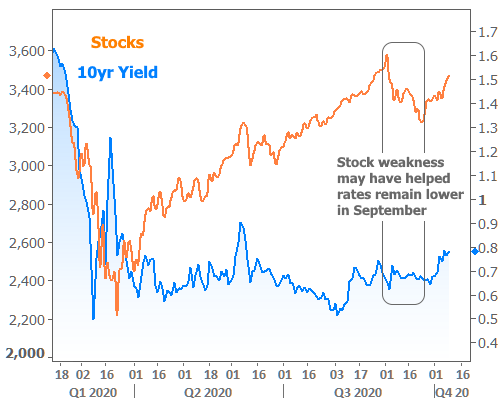 As stocks found their footing, rates may have simply decided to resume their previous move higher.  We can also consider simple chart patterns that suggested bonds had to make a choice at the end of an uncommonly calm and narrow September.  In fact, after such a consistent theme in one month, it’s not uncommon to see an obvious change of pace and direction in the new month. The bond market and banks will be closed on Monday in observance of Columbus Day.  Bank holidays can affect the mortgage process.  Monday won’t count as part of the 3-day wait between closing and funding for refinances, and wire transfers will be on hold until Tuesday.  In addition, few lenders publish new rate sheets or accept locks on bank holidays.