Another week, another glut of news articles claiming mortgage rates are at all-time lows. While no one is intentionally trying to deceive you, the news is deceptive nonetheless.

Freddie Mac’s weekly mortgage rate survey is at the heart of the issue.  The survey is a mainstay of the mortgage industry and the news media.  It’s been around for decades and is really the only mortgage rate benchmark the industry has.  Despite the apparent street cred, their numbers can be hopelessly inaccurate at times.

There are two reasons for the inaccuracy.  The first is the survey’s methodology.  Freddie publishes the survey on Thursday but sends out the questionnaire on Monday.  While they accept responses through the middle of the day on Wednesday, most respondents reply when they receive the survey (on Monday).

This methodology ensures any major changes in rates on Tuesdays and Wednesdays are underrepresented, even though rates from those days are more timely.  The net effect is that the survey most closely tracks mortgage rates on any given Monday.  That’s a big source of confusion in cases when Thursday’s rates are vastly different from Monday’s.

An even bigger source of confusion–especially in the past few weeks–is the fact that the survey only asks for purchase mortgage rates.  Why is that a big issue?  If you happened to read previous newsletters discussing the new fee for refinances, you already know.  Refi rates are noticeably higher than purchase rates.  The gap is at least 0.125%, but it can be much higher for some banks.

Once we account for these factors, we can come very close to reconciling the bogus “all-time low” rate news.  Monday’s purchase rates were at least relatively close to previous all-time lows.  For refinances, however, they’re not even close.  That’s a problem when refinances account for a majority of the mortgage market.  The following chart shows how far apart Freddie’s survey rate has drifted from actual daily averages. 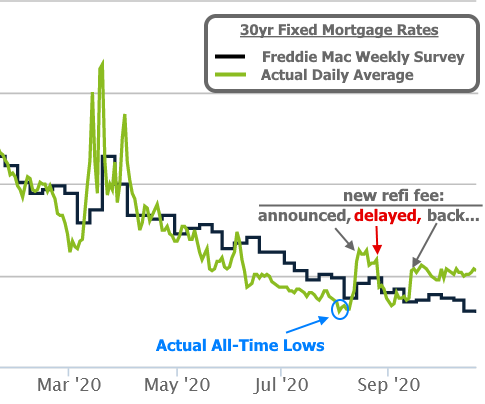 To put the scale of the chart above in context, there is about a 0.25% difference between current rates and the all-time lows seen in early August.  Even so, things could certainly be a lot worse.  Just ask the broader bond market.

What’s the “broader bond market” and why should you care?  Bonds are the safe-haven investments that generally serve as a counterbalance to stocks.  The 10yr US Treasury Note is the quintessential example.  10yr yields (another word for “rates”) historically move in almost perfect lock-step with mortgage rates because mortgages are also based on the bond market.  After all, a bond is another word for a loan.  A mortgage is a loan to a homebuyer whereas a Treasury Note loans money to the US Government.

The bonds that underlie mortgages have a different set of concerns than Treasuries right now, and they’ve fared better as a result.  Additionally, mortgage lenders have yet to drop rates nearly as much as mortgage bonds suggest (they couldn’t handle the additional volume if they did).  That’s actually a good thing in this case, because at almost any other time in history, the following chart would all but guarantee a noticeable uptick in mortgage rates in October. 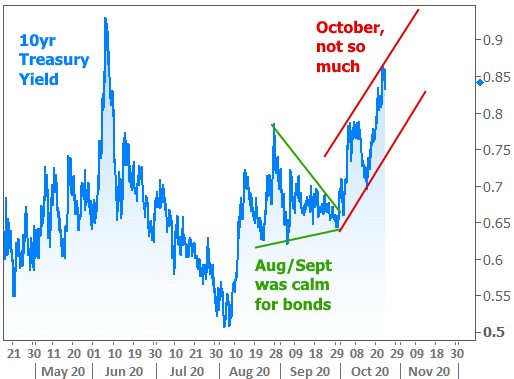 Instead, rates have moved higher only gradually, and have been better described as “flat” in October.  The following chart shows mortgage rates vs 10yr Treasury yields.  NOTE: each line is on a different axis.  10yr yields are much lower than mortgage rates.  The only purpose of this chart is to observe how they’ve moved in different directions recently. 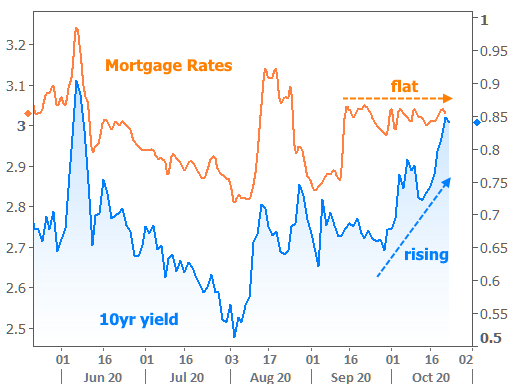 In economic data this week, new construction wasn’t able to make significant progress as reported by the Census Bureau.  “Housing Starts” are a measure of broken ground on new residential home sites.  Perhaps this is as fast as builders can build given the operational challenges presented by the pandemic? 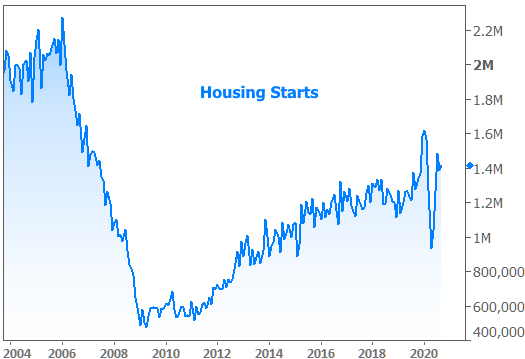 Builders certainly don’t seem bothered!  In separate data from The National Association of Homebuilders (NAHB) builder sentiment came in at a record high for yet another month. 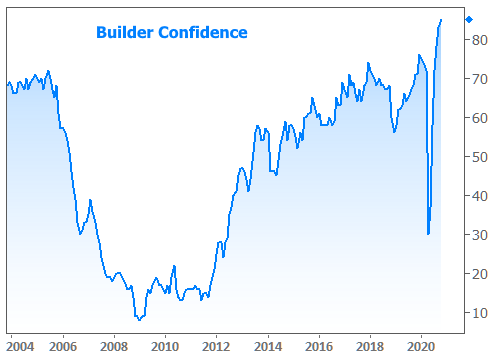 And it’s not just builders who are upbeat.  Anyone selling a home was likely to find overwhelming demand in September according the Existing Home Sales report released this week.  While not at an all-time high, sales easily broke their previous housing bubble record and have exceeded even the most optimistic post-pandemic expectations for 2020. 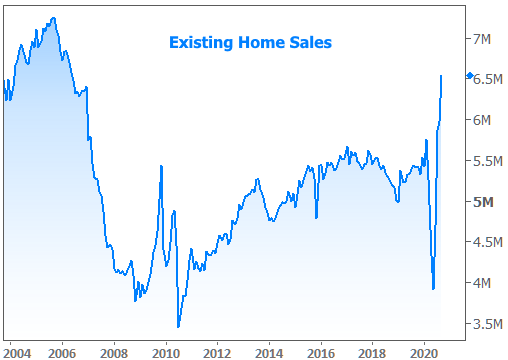 We’ll get another indication of existing home sales data with next Thursday’s Pending Home Sales Index.  This report tends to lead existing sales by 1 month.  Before that, the week ahead offers several other housing-related reports.  New Home Sales leads off on Monday morning.  Then on Tuesday, both Case Shiller and the FHFA release home price data (the latter will bring us one step closer to forecasting next month’s new conforming loan limits).  Weekly mortgage application data will be released as usual on Wednesday morning.

Away from the mortgage market, Thursday marks the first release of Q3 GDP data, which is currently tracking to fully erase the 31.4% loss seen in Q2 (forecasts are calling for +31.9%).

← Prev: All-Time Low Mortgage Rates? Not Exactly... 2016 Reminds Us How Completely Crazy Next Week Could Be For Rates →

The National Association of Realtors' Existing Home Sales report is the broadest measure of housing market activity. It just hit a 14-year record for the 3rd month in a row. It's not just existing homes.  The new home market is crushing it as well.  This week's data...

Rarely does the month of November offer so much activity for the housing and mortgage markets, but it always offers an updated conforming loan limit. This refers to the maximum loan amount for mortgages that "conform" to the guidelines of housing agencies Fannie Mae...

Election Week Was a Win For Mortgage Rates