The 2016 election won’t soon be forgotten in the mortgage or bond markets. Many of the predictions were dead wrong when it came to how interest rates would react to a Trump victory, and the reason ended up being very simple in hindsight. Are there any parallels that can help us prepare for the coming week?

First off, let’s be clear on what we’re discussing.  A picture is worth more than words in this case. 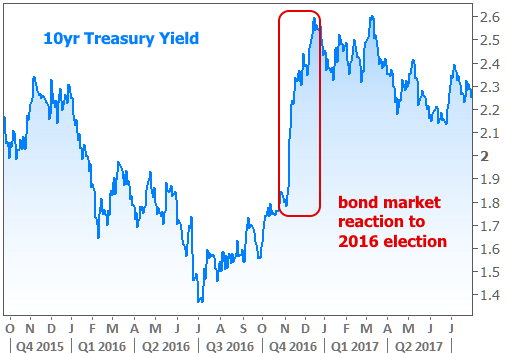 10yr Treasury yields are the best indication of the longer-term bond market.  Mortgage-backed bonds (which determine mortgage rates) tend to move in a substantially similar way over time.  As such, it was no surprise to see mortgages walk a similar path.  In short, interest rates got rocked (in a bad way). 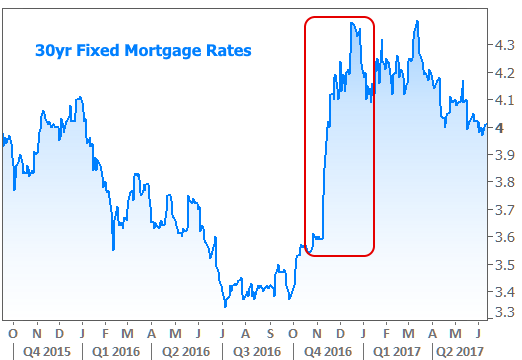 While the average market maven was preoccupied with the “uncertainty” of a Trump presidency causing stock losses and bond gains (i.e. lower rates), the reality was that unified republican control meant a tax cut was basically guaranteed.  It only took markets a few hours in the middle of election night to wake up to that fact.  Everyone who expected “uncertainty” to usher in lower rates was left scratching their heads (at least until 2019 when uncertainty surrounding the trade war actually did help rates move significantly lower).

To be very clear, we could absolutely see a big move in markets and sustained upward pressure in rates in November.  But it would be a surprise to see a rate spike the size of 2016’s–even more surprising than it was in 2016!

The pandemic is the first limiting factor.  It doesn’t seem to be going away any time soon.  To whatever extent it subdues economic growth expectations heading into the winter, rates would be hard pressed to freak out like they did last time.

That said, rates can still freak out.  Like 2016, the biggest risk for market volatility would be the shift from a legislative stalemate to unified control.

Like 2016, there are predictions and assumptions about what unified control would mean, but in addition to the point above about 2016’s consensus being so wrong, 2020’s implications are easier to argue two ways--at least until we have the benefit of hindsight, then suddenly everyone will talk about how clear it all was!

Almost every forecaster agrees unified democratic control would mean big stimulus and a tax policy adjustment in 2021.  There’s less agreement about the implications.

On the one hand, stimulus implies Treasury issuance (more government bonds to pay for “stuff”) and thus a stronger economic recovery–both of which are bad for rates.  On the other hand, tax hikes can hurt stocks, and they would unequivocally increase revenue, thus limiting the need for additional Treasury issuance.  Both those things are good for rates, all other things being equal.

All other things are rarely equal and the path forward is no exception.  Sure, tax revenue and a bear market in stocks would be great for rates, but stimulus spending (and the general ability of a unified government to spend more money) could overshadow the tax-based revenue benefits.  By the time we add the economic benefits of fiscal stimulus, bonds could be very unhappy indeed.

Perhaps this is a reason that Treasury yields have already taken a lead-off in an unhappy direction, moving back to the top of their range over the last 3 months. The move in October is even more telling.  In fact, bonds looked like they were calming down in September, but once October hit, the tone completely changed.  This was initially a reaction to bipartisan stimulus prospects, but when rates continued higher even after stimulus was put on hold (and despite rising covid case counts), the election moved into the scapegoat spotlight. 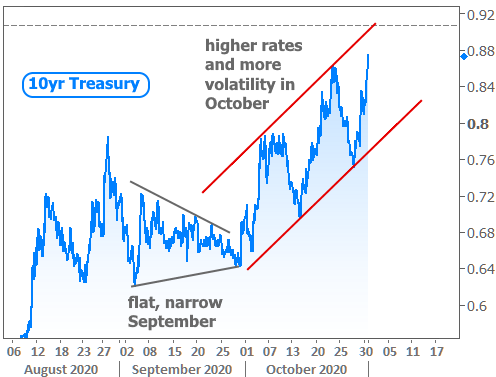 And now for the biggest caveat of all: mortgage rates have been heroically defiant throughout the rising rate trend seen in the past 2 charts.  Let’s compare them with Treasuries.  Both spiked in August, but only one has done a nice job of recovering since then. This isn’t evidence of some special ability on the part of the mortgage market.  Rather, it’s a lingering byproduct of a mortgage-specific limitation.  At the onset of the pandemic, mortgage rates simply weren’t able to keep pace with the drop in Treasury yields.  To this day, the average 30yr fixed mortgage rate is still farther away from 10yr Treasury yields than it ever was before the pandemic.

In other words, mortgage rates haven’t had to rise much in the past few months because they never fell as much as the broader bond market suggested in the first place.  Bottom line: yes, rates can definitely still rise as a result of next week’s election.  They could even enter a sustained period of upward movement.  But a relatively apocalyptic scenario like the one seen in 2016 seems like more of a long shot this time around. 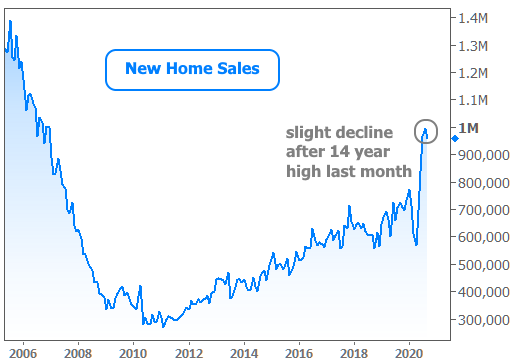 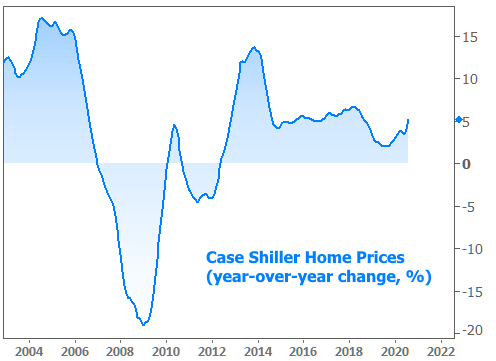 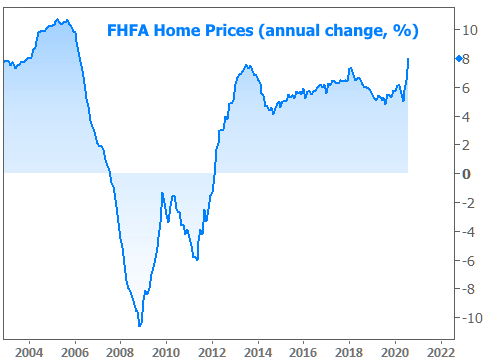 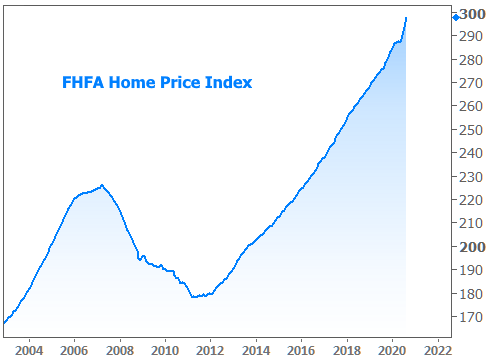 One interesting fact about this last report (FHFA home prices) is that this data feeds the calculation for updated conforming loan limits next month.  Given the acceleration in home price appreciation, the new loan limit is tracking for an increase of nearly $40,000.

Rising rates have been on the menu for months, but the drama kicked into a higher gear this week. Maybe you heard about this?  We've certainly been discussing it in recent newsletters (especially last week's).  The rising rate narrative hit the mainstream this week as...