The headline makes a lofty claim, but let’s put doubt to rest with 3 facts right up front.

When we have things happening in other markets such as all-time low 10yr Treasury yields (Monday) or the biggest-ever single day loss in stocks (several times, depending on the index), it’s not hard to imagine that big things are happening elsewhere in financial markets.

What’s causing all this?  In a word: Coronavirus.  The stock market reaction is well-documented, but the record rally in rates is just as impressive. 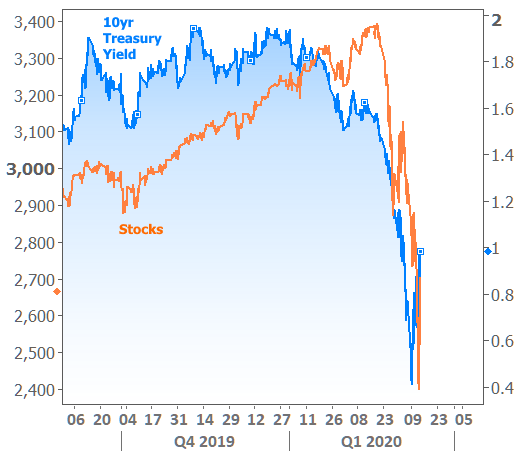 In the interest of keeping this short and sweet, here are the previous newsletters that have covered the unfolding market drama:

While coronavirus dominated the headlines, massive drama was unfolding in the mortgage market.  All-time low mortgage rates were already in place by March 2nd.  Refinance demand was already spiking, but the subsequent jump was the biggest ever recorded. 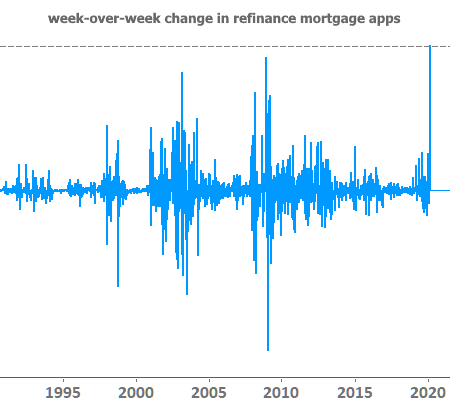 In financial markets, unprecedented opportunity often comes with unprecedented consequences.  In this case, the glut of refi demand was so overwhelming that mortgage lenders couldn’t move loans off their books quick enough to keep up with demand for new loans.  The demand could only be created by selling the loans to investors at lower and lower prices.

When investors pay less for mortgages, rates move higher.  In the chart below, each candlestick represents 1 day of price movement in this market for loans sold to investors (mortgage-backed securities or MBS). 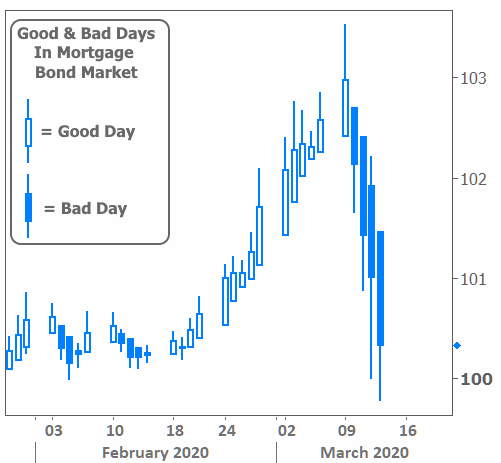 Contrast that to the price of 10yr Treasury debt (frequently thought of as a key indicator for mortgage rates).  There’s really no comparison. 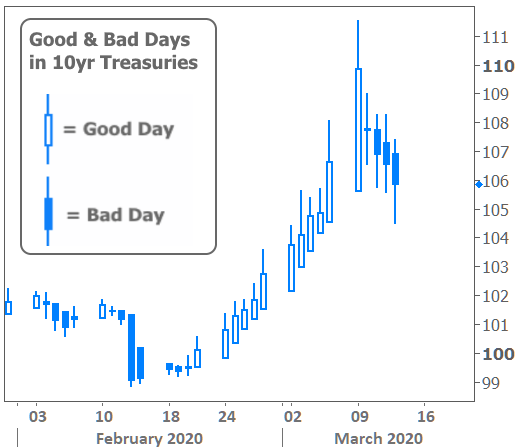 Funding issues compounded the problem as some lenders completely exhausted their own sources of financing. In other words, many lenders borrow money with short-term loans in order to originate more  mortgages, and many of those wells ran dry this week.  Where water remained, there was a steep price to be paid. Lenders’ creditors greatly increased their margins which directly results in higher rates for consumers.

Lower prices from investors…  Higher margins from creditors…  Underlying momentum toward higher rates after Monday’s bounce at all-time lows…  It all added up to the fastest-ever spike in mortgage rates (seriously… and yes, I’m including 1987 in my look-back).

Mainstream media is a bit behind the curve when it comes to mortgage rates.  The most widely cited resource is Freddie Mac’s weekly rate survey.  Unfortunately, it only captures the first few days of any given week, and a majority of this week’s drama unfolded in the 2nd half. 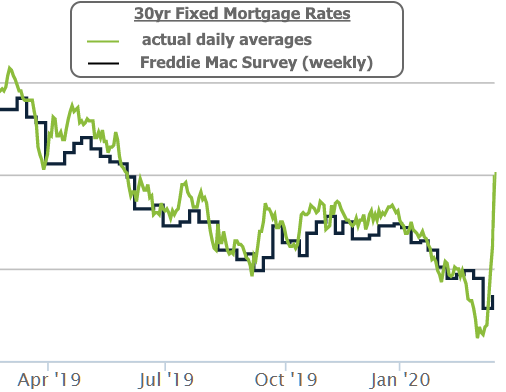 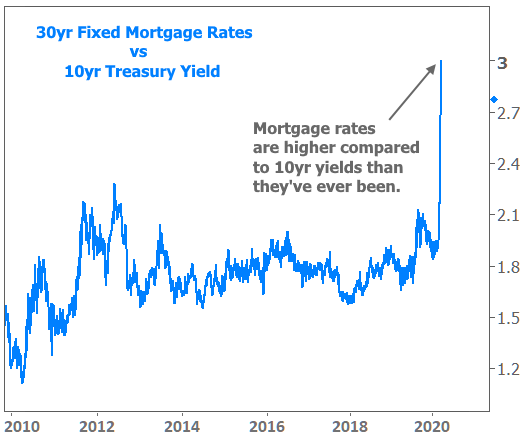 The Federal Reserve is widely expected to cut rates again next week and possibly announce a new round of large-scale bond buying (quantitative easing or “QE”).  But remember, a Fed rate cut doesn’t directly affect mortgage rates.  Fortunately, the mortgage bond market may have pushed prices low enough for investors to start nibbling on new loans instead of pushing them off the table.

Even so, a bounce back toward lower levels will take some time.  Rates moved up and out of most peoples’ target refi ranges this week.  That makes this the perfect time to make a game-plan with your friendly neighborhood mortgage pro so all parties can be ready to rock (and LOCK) as soon as rates get into your target range.

← Prev: What The Fed's Emergency Rate Cut Means For Mortgage Rates Mortgages Make The Fed Angry. You'd Like Them When They're Angry →

Are We In The Midst of Another Mortgage Meltdown?

Things are changing rapidly in the mortgage market. Almost overnight, loan programs have disappeared, interest rates are all over the place, and more than a few lenders are closed for business indefinitely. All this despite the Federal Reserve buying more than $100...

Who Broke The Mortgage Market And When Will It Be Fixed?

There's been no shortage of crazy weeks in the mortgage market lately, and this one was not to be outdone.  By the end, the prices of the bonds that normally determine mortgage rates surged well into record highs.  That would normally suggest the lowest mortgage rates...

Mortgages Make The Fed Angry. You’d Like Them When They’re Angry

Last week was the wildest in the history of the mortgage market.  This week was wilder.  It ended with a one-of-a-kind show of force from the Federal Reserve.   This wasn't necessarily destined to be the case, but things changed dramatically on Wednesday. By then,...