Why 2019 Could Actually be Great For Housing and Mortgage Markets

It’s worth mentioning that different metrics suggest different conclusions.  For example, compared to 3 years ago, Existing Homes Sales are nearly 10% lower at last check, but New Home Sales are 30% higher. 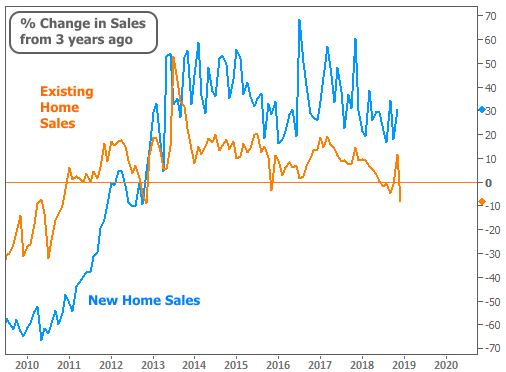 But this actually isn’t the best way to make a case for the housing market at the moment.  New Homes represent only a small piece of the pie.  They fell harder during the Financial Crisis and have thus been able to bounce back more stably.

An optimistic viewpoint is better-served by considering the reasons behind housing’s shift in 2018 and then asking ourselves “what’s next?”  Opinions vary as to what did the most damage to housing, but there is broad agreement that higher rates had an impact.

You may be thinking to yourself “wait!  There’s not broad agreement, because when people want to buy a house, rates don’t matter.”  It’s true that rates don’t matter to a great many would-be buyers, but some buyers on the margins of qualifying for the most affordable homes suddenly find themselves unable to buy.  On the other end of the spectrum, a certain percentage of potential move-up buyers simply decide it makes more sense to stay in place if the new mortgage payment would be too high.

With all of the above in mind, it’s no surprise to see how sales responded to the two biggest rate spikes in recent memory (highlighted in the chart below).  Notably, housing would likely already be bouncing back from the 2018 spike, but the stock crash and government shutdown caused confidence issues for some homebuyers (and paycheck issues for others!). 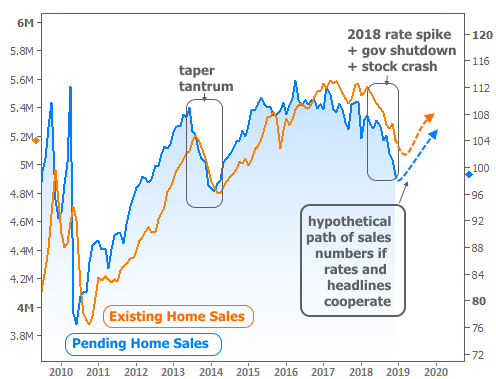 But now, rates are near their lowest levels in a year.  As of this week, it looks like we’ve averted another government shutdown.  And stocks have clearly been able to recapture much of the ground they’d lost.

Whereas we might worry that a strong stock market could pull interest rates higher, the recent shift in tone from the Federal Reserve has allowed rates to stay near their lows even as stocks advance.  The following chart shows how well correlated stocks and rates were heading into the Fed Announcement at the end of January, and how quickly they diverged afterward. 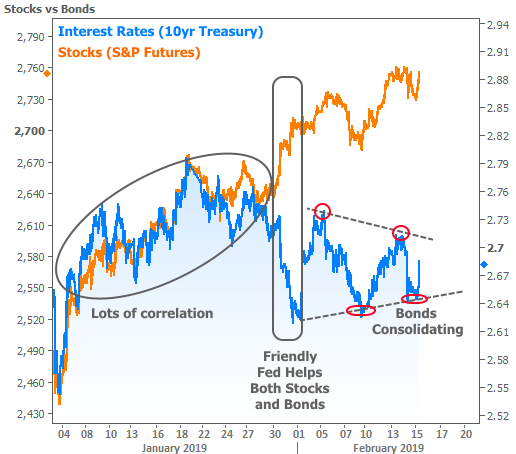 Crossing over to the mortgage side of the housing market, we find even more reason to be optimistic.  When it comes to homebuyers seeking mortgages, this January has actually been better than last.  Lower rates have also helped refi demand increase. 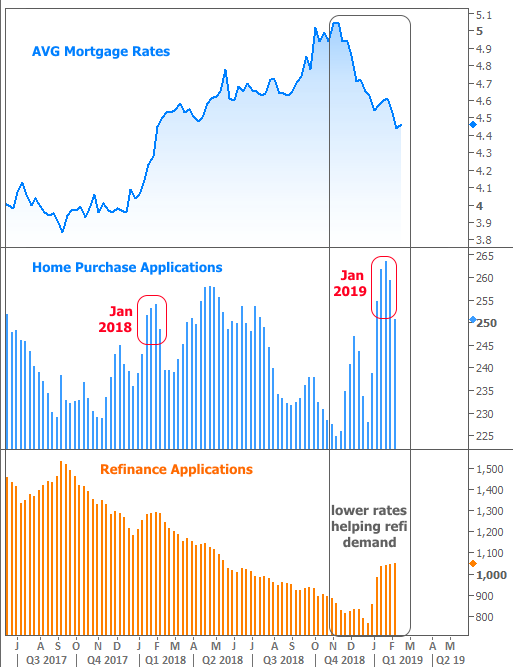 Zooming out to a wider view is even better for purchase applications.  There we see a consistent trend of strength in January followed by a bigger surge as home sales hit their seasonal peak in Spring/Summer. 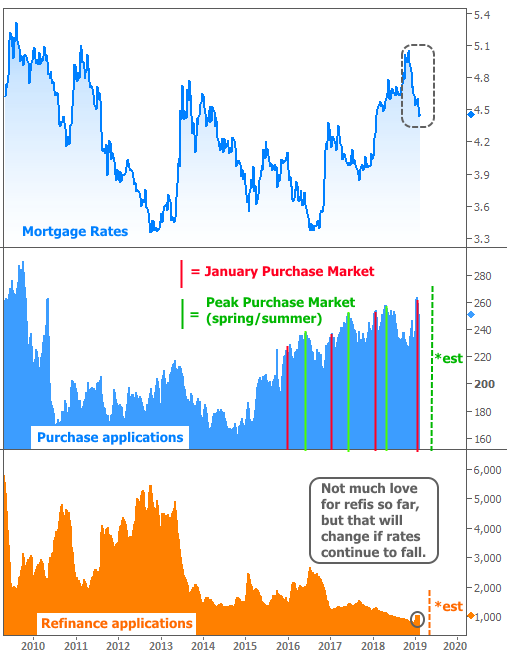 The bigger picture is not kind to the refi market, but very few homeowners have had an incentive to refi since rates fell in the middle of 2017.  That said, rates are now on the verge of falling to levels that would make refinancing attractive to a majority of homeowners who bought their homes any time after 2018.

As far as keeping track of the housing-related developments, next week brings another installment of the monthly Existing Home Sales report.  It’s important to remember that Existing Sales tend to follow Pending Sales, and we’ll likely need to see a bigger bounce there before Existing Sales follow suit.  Pending Sales will be released the following Tuesday, Feb 27th.  If we see a noticeable improvement, it will add to the case for the housing market being on its way to a strong 2019

← Prev: Lowest Rates in a Year, And They Could Go Even Lower. What Changed? Why The Housing Market Cares About The Fed →