2021 hasn’t been a great year for mortgage rates–at least not as far as their trajectory is concerned. But that could be changing.  Even if things don’t get any better from here, the past 3 weeks are collectively the best we’ve seen since January. 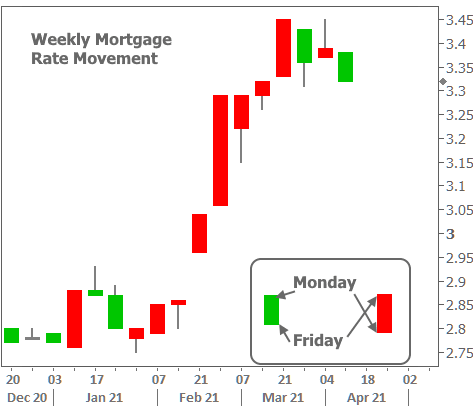 Mortgage rates are primarily driven by day-to-day movement in the bond market.  There is a particularly strong correlation between 10yr Treasury yields and mortgage rates.  While this definitely wasn’t the case for much of 2020, the correlation is now generally back intact.  As such, the ability of 10yr Treasury yields to remain under a ceiling of 1.75% has coincided with resilience in the mortgage market. 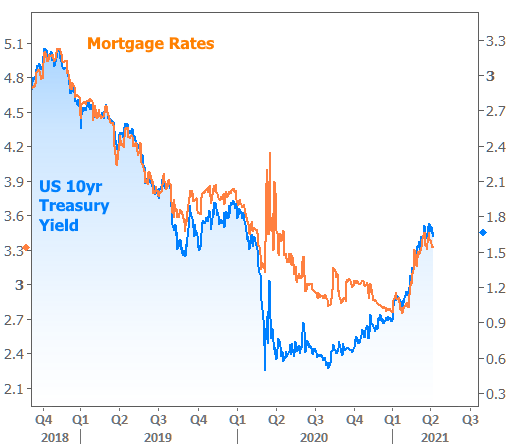 If we zoom in on the blue line, we can see 10yr yields departing their prevailing trend for 2021 and starting to move sideways in recent weeks. 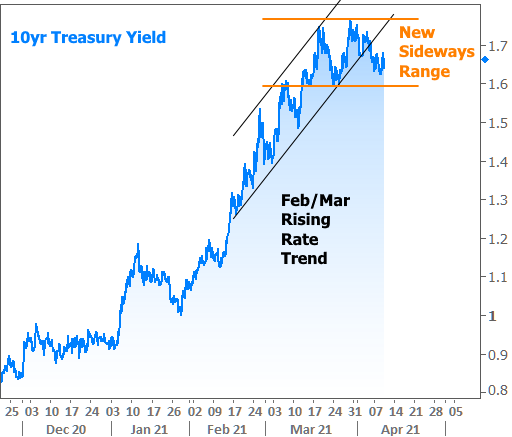 It was only a matter of time before the rate spike gave way to this sort of consolidation.  The bigger question is how long it will last and how much lower might rates go?

Financial markets are always doing their best to predict the answers to all those types of questions.  In other words, if we knew rates would go much lower or higher with certainty, they’d already be there.  Traders are waiting to see if a recent uptick in covid cases poses a material threat.  New variants are of particular concern, but financial markets won’t be too bothered unless numbers increase enough for more widespread lockdowns.

In general, “bad things” (more covid, weaker economy) are good for rates, but the opposite is also true (less covid and a stronger economy = higher rates).  With that general truth in mind, it comes as somewhat of a surprise to see this week’s strong economic data juxtaposed with the decent showing for rates.

Leading the charge was a key report on the services sector, the ISM Non-Manufacturing Index.  Along with its twin report on the Manufacturing sector, ISM provides a timely barometer for the broad economy (we’ll be waiting waiting several more weeks for the first Q1 GDP estimate).  Getting to the point, this week’s ISM report was quite strong–the strongest on record, in fact. 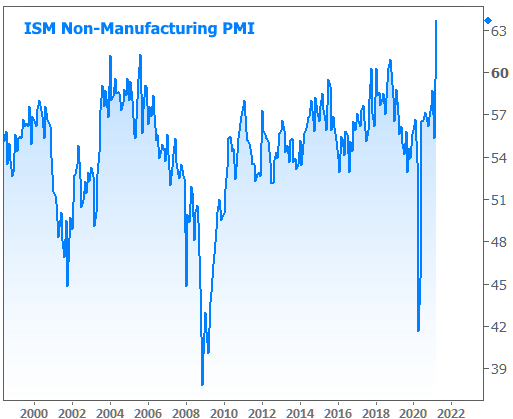 The Producer Price Index, which measures inflation at the wholesale level, put on a similar show. 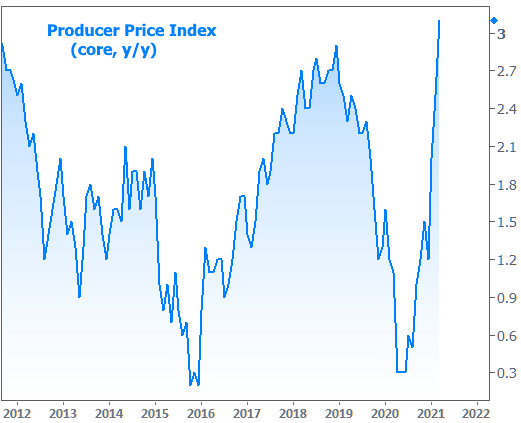 While students of the 70s and 80s will tell you this comes nowhere close to a record, it’s a lot higher than it was.  And high inflation implies higher rates.  As such, it would be fair to expect upward pressure on rates, but rates actually FELL on the day of the report.  They did the same on the day of the strong ISM report–also a counterintuitive movement.

What’s up with that?

Remember that sentence about financial markets always trying to trade the future to the best of their ability?  This is one big reason for the rate spike already seen in 2021.  Markets have expected inflation and economic data to improve.  In that sense, the strong data is really just confirmation of what was already assumed.

Rates also have considerations beyond the economic data.  Covid, of course, is chief among those.  If epidemiologists and traders are concerned about rising case counts (and new variants), those concerns can take center stage.  After all, the course of the pandemic will ultimately have a big say in the trajectory of the economy.

Finally, there are considerations that speak more to the nuts and bolts of the bond market, even if they can be traced back to the pandemic and the economy.  Specifically, the issuance of new Treasury debt (which is used to pay for things like covid relief bills and other federal spending) is one of the most important components of the interest rate equation.  Perhaps more than anything else, big increases in Treasury issuance have been responsible for the most obvious upticks in rates at various times over the past 5 years.

With that in mind, anything that suggests the government might have a harder time spending as much money as previously thought could be good for rates.  West Virginia’s Senator Manchin provided exactly that on Thursday with an op-ed that called the $2.3 trillion infrastructure plan into question.  Manchin is extremely important on this front because democrats can’t pass the legislation without his vote.

Some form of the infrastructure plan will eventually pass, but if it’s smaller than $2.3 trillion or if it takes longer to happen, there are incremental benefits for the bond market due to lighter Treasury supply (i.e. downward pressure on rates, all other things being equal).

On the demand side of the equation, we’ll learn more about how traders are feeling next week.  Monday and Tuesday bring 3 big Treasury auctions (3 and 10yr notes on Mon and 30yr bonds on Tue).  Bidding statistics are released immediately following the auctions and can have a noticeable impact on rates–occasionally setting the tone for entire weeks in 2021.

For all the focus on rates, what’s the damage?  We looked at that in terms of sales and prices last week, so let’s look at mortgage applications this week.  There’s no question that apps are down due to the rate spike. 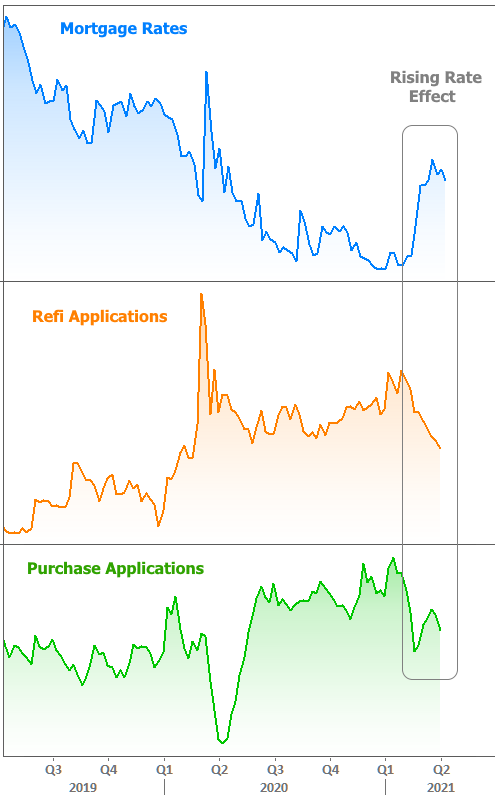 But if we zoom out, we can see that current levels are still well above those seen in 2019.  In fact, you’d have to go all the way back to early 2013 to see more refinance demand and more than a decade to see higher purchase demand, and that’s with the lowest inventory levels on record.  Purchase applications would likely be significantly higher if inventory were anywhere close to pre-pandemic levels. 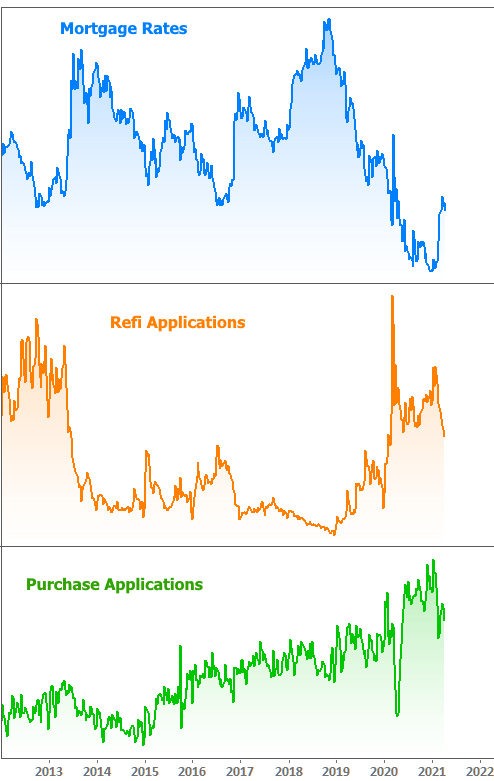 The inventory situation could improve if Fannie Mae’s Housing Survey is any indication.  The number of respondents who said it was a “good time to sell” surged to the highest level since before the pandemic. 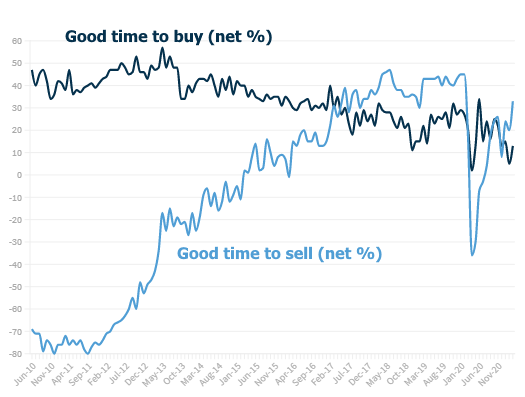 ← Prev: Who's Lying About The Housing Market? Best 2 Weeks For Rates in Nearly a Year →

Rates Reacted to Jobs Report, But Not Like You’d Expect

Once a month, the government releases the Employment Situation, also known as "the jobs report."  No other piece of economic data is as consistently relevant for the bond market and, thus, interest rates.  For most of the past year, the normal correlation between jobs...

Moment of Truth For Rates and Housing

This week's 6.4% reading on Q1 GDP reinforced the notion of a strong economic recovery. In turn, the recovery helps to justify the sharp move higher in rates seen during the same 3 months. Rates managed to recover quite a bit in April, but ended up rising...

15-Year High For New Home Sales, But Prices Are Flat. Here’s Why

This week's New Home Sales report (for the month of March) stole the show, coming in over 1 million for the first time since 2006. But although sales are up 66% year-over-year, prices have fallen in recent months and are now basically unchanged from last year. What's...