Just When You Thought They Were Gone, All-Time Low Rates Are Back

Mortgage rates plunged well into new all-time lows this week, which is a striking turn of events given the vastly different outlook at the end of last week.

Specifically, a series of strong economic reports led to significant losses in the bond market (bond losses = higher rates) and gains in stocks. The unspoken warning was that rates had been too complacent in the face of a potential economic rebound.

Now this week, markets are singing a different tune. Recently strong economic data was great to see, but with coronavirus numbers spiking in several states, the sustainability of the economic improvement is in question.

Sentiment shifted on both sides of the market with stocks giving signals that their recent gains may have been a bit too euphoric. The result was the biggest sell-off since March.

Conversely, the bond market had its best week since March, and again, when the bond market is doing well, rates are falling.  The 10yr Treasury yield moved all the way back into the range it had so abruptly departed last week. 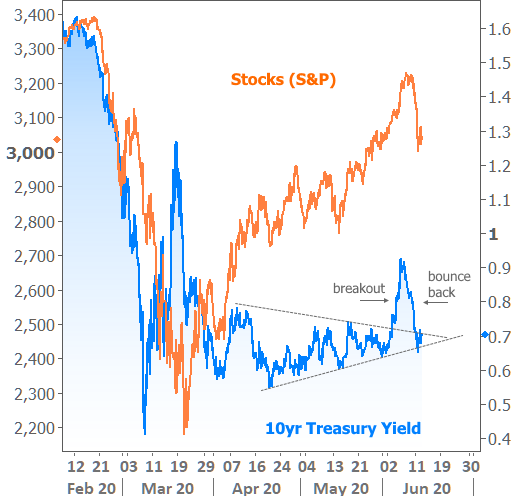 The news was even better for mortgage rates, which hit new all-time lows by Thursday afternoon.  Considering the chart above shows gradual upward movement in 10yr Treasury yields over the past few months, how is it that mortgage rates continue hitting record lows?

Simply put, mortgages never improved as quickly as Treasuries on the way down.  So even if Treasury yields remain flat to slightly higher, mortgage rates have some room left to close some of this gap. 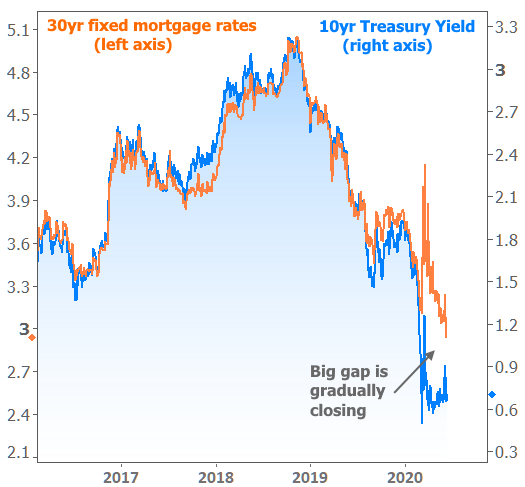 The mortgage market received another vote of confidence this week from the Fed.  Although the Fed was already buying huge amounts of Treasuries and mortgage-backed bonds, they were doing so on an “emergency” basis.  That meant the amount had been changing every week (and generally declining).  The fewer bonds purchased by the Fed, the worse it could be for rates.

With this week’s announcement, the Fed officially committed to buy at least as much as they have been buying, thus providing certainty about demand in the bond market.  This move wasn’t necessarily unexpected, but the confirmation was worth something–especially for the mortgage bond market which tends to play second fiddle to Treasuries as far as the Fed is concerned.

In separate news, the Fed also released a quarterly update to its economic forecasts.  They now see the Fed Funds Rate remaining at 0% through 2022.  At first glance, some mortgage shoppers might think this has a bearing on mortgage rates, but it is almost completely unrelated.

The Fed Funds Rate applies to overnight loans between large financial institutions.  Mortgage rates are based on mortgage-backed bonds which tend to have life spans measured in years instead of hours.  The low Fed Funds Rate will keep the shortest-term rates near 0%, but longer-term rates will continue to fluctuate based on the economic outlook, inflation, and the supply/demand equation (which is greatly benefited by the Fed’s bond buying commitment).

As for the road ahead, everyone would like to know if we’ll continue deeper into all-time low mortgage rates.  After all, the answer to that question looked very different last week.

Notably, the x-factor was a shift in the coronavirus narrative.  As states gradually reopen, it’s safe to assume that markets will continue to take major cues from covid-19 numbers and the resulting impact on the economy.  The better it goes, the more upward pressure we might see on rates.  The worse it goes, the greater the possibility of a return to all-time lows.

There is an important caveat here.  The benefit of waiting to lock a rate for those in a position to do so is arguably too small to take the risk.  Each time we hit all-time lows, the incremental improvements get smaller and smaller, and the risks increase for a bigger-picture bounce.

← Prev: Are All-Time Low Mortgage Rates Behind Us Now? The Great Debate for Rates, Housing, and Markets →

This week's economic data included the biggest-ever gain in Pending Home Sales, a leading indicator for the housing market. Meanwhile, mortgage rates pushed down to new all-time lows yet again. But at what cost? The most pessimistic way to explain the surge in home...

The fates of the economy, the housing market, and interest rates remain closely intertwined with coronavirus.  The pandemic is clearly responsible for the record-setting drop in economic activity (including the housing market). And it has clearly been the key source...

The Great Debate for Rates, Housing, and Markets

Coronavirus hit markets with unprecedented force in March. Stock prices and bond yields sank.  When the outlook grew less dire, markets began moving back in the other direction.  As quarantine measures ease, fear surrounding a second wave of COVID-19 is pushing...